My father became a higher education physical plant director after owning his own business, and somewhere along the way, my career goal became the top facilities job at a university. New Mexico State University (NMSU) Senior Vice President for Business and Finance Jennifer Taylor gave me that opportunity in 2008 and, guided by our philosophy of One Team | One Goal, our facilities organization was a recipient of the 2016 APPA Award for Excellence. I was also privileged to serve on the APPA Board of Directors and receive the APPA Meritorious Service Award. I retired as the chief facilities officer at NMSU in April 2019. 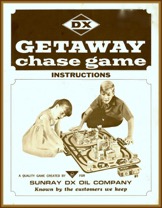 I guess that I’m neither the first nor will I be the last to have reached a significant milestone in life while reflecting on the many mentors, friends, and advisors who helped me along the way. More to the immediate point, passing along what others took the time to share with me is a way to give something back. I recently wrote about what I learned from my first “boss,” Ron Newman. This story is about my dad.

When I was in elementary school, the most coveted Christmas gift one year was the Getaway Chase Game, made for Sunray DX Oil by AMF. For those that remember, oil companies would put their names on toys as promotional items. Getaway Chase was a slot car game with two battery-powered cars, and one player chose the police vehicle while the other assumed control of the gangster’s car. Each competitor then used switches to swap the little autos from track-to-track as the officers chased the criminals around the cardboard town, with the police capturing the crooks by bumping into them.

When my brother and I opened the box on Christmas Day, we could not wait to assemble the city and play the game. However, there was something amiss in that the police car was twice as fast. This inequity spoiled the game, as the officer’s car could catch the gangsters too easily.

These were the days of typewriters, and my Dad addressed a letter to Santa Claus with a real carbon copy to the AMF Chief Executive Officer. He explained to Santa how much he appreciated the gift, how disappointed his two boys were, and then he asked Santa to please find a different company with which to do business.

Before Santa Claus had a chance to respond, Daddy received a carbon copy of a letter from the AMF chief responding to Santa and asking for a second chance. To demonstrate their goodwill, the executive also sent two of each of the cars. Not only that, the company mailed numerous gift certificates for additional AMF products to the family, and for his trouble, my father was given discount certificates for golf equipment, as AMF had purchased the Ben Hogan golf company in 1960.

This outcome literally stuck with me throughout my entire life: indeed, the Power of the Pen.

I was neither the best nor the most attentive student, and was, both literally and figurately, a rebel child of the 60s. However, from 7th grade English grammar through Freshman Composition in college, I paid attention and knuckled down when professors talked about essays because I knew the value of a convincing argument on paper.

While I never reached the literary skill level or developed the creative imagination of my father, being able to compile a grammatically correct and complete document served me well throughout my career. There were numerous times when I was able to make my case by preparing a thorough synopsis or a convincing analysis. The submission for the APPA Award for Excellence hinges on being able to make a persuasive case for your team and in that respect, the award was a capstone for my skills.

We spend our time in school and continuing education learning technical skills and improving our leadership abilities, and yet, many times we forget the basics. Being able to write well is an essential ability needed by everyone. In the facilities world, we provide analyses of KPIs, resolve construction disputes, and we make our case with administrators for deferred maintenance funding; there is an unlimited number of examples where good writing translates into being an effective manager.

If you want to improve your composition skills, start by practicing. There are numerous documents needed around any office, and if you’re going to learn to write more effectively, offer to author and proofread for others. If you can make time, find and enroll in a business writing class. Composition skills will always serve you well, even if the end product is a cover letter and a resume for your dream job down the road. Excellence in preparing documentation is the mark of a professional and being able to write well will distinguish and elevate you from others.

After Daddy passed away and my brother and I were cleaning out his garage, we found a pile of household items in the corner, a collection of purchases gone awry over which our father had embarked on a letter-writing debate with company management to get either a new product or a refund. He loved an adversarial exchange of letters up until the day he died. There was a portable handheld vacuum that no doubt didn’t live up to the advertising claims, a computer keyboard that appeared to have a broken support tab, and a few more items that we just took to Goodwill. Those companies didn’t win their argument; Daddy just ran out of time.